School textbooks are central media of construction for national and cultural identities. They transport official normative structures into all areas of society and, through their adherence to state curricula, reflect the symbolic values and ideas with which societies attempt to inspire social cohesion, to convey cultural traditions, and to establish political legitimacy. 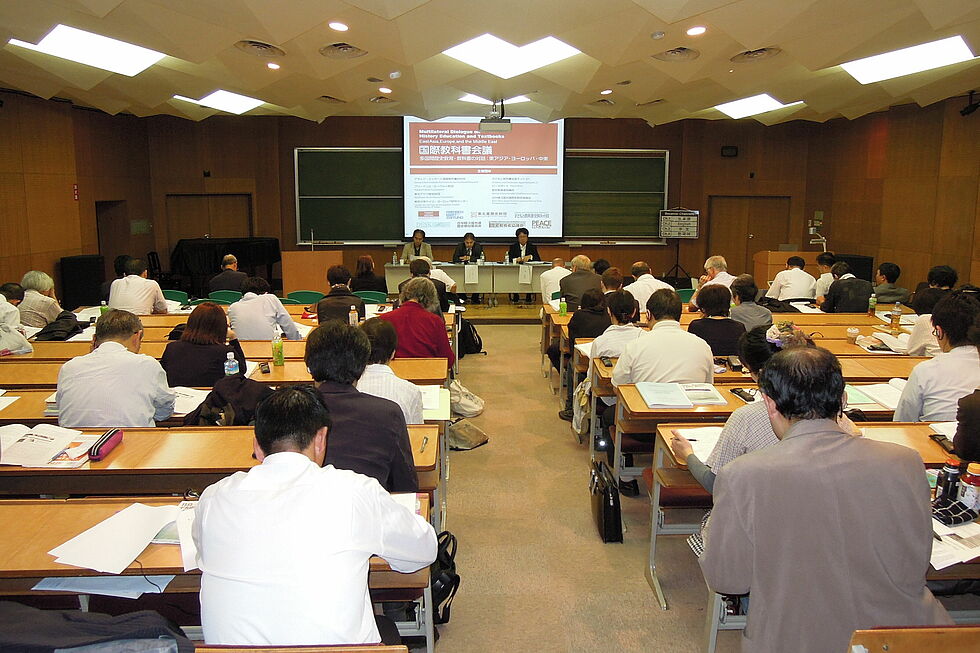 School textbooks are central media of construction for national and cultural identities. They transport official normative structures into all areas of society and, through their adherence to state curricula, reflect the symbolic values and ideas with which societies attempt to inspire social cohesion, to convey cultural traditions, and to establish political legitimacy. Textbooks are, therefore, always a political issue that can both trigger or become the subject of deep ethnical, political, cultural or religious conflicts or social crises and yet also significantly contribute to preventing or overcoming such situations. In the last three decades the role of school textbooks and teaching materials has achieved a new status with the challenge of globalization and the associated new electronic means of communication and worldwide migration. The emergence of multiethnic societies may help to overcome spatial and cultural boundaries; however, divided cultural traditions and spaces of memory also give rise to new forms of intercultural misunderstandings and the creation of stereotypes. Since the beginning of the 20th century, numerous organizations and activities with the aim of international textbook revision have evolved and are still evolving. These activities have always acknowledged the central role played by textbooks and teaching materials in peace education and work towards international understanding. The main actors have been multilateral organizations (e.g. League of Nations, UNESCO, European Council) and bilateral or – in the East Asia case – trilateral committees on the governmental and/or civil society level. Looking at the past 100 years of textbook revision, it seems that multilateral activities have not had as much success as its protagonists aimed at. In contrast, bi/trilateral approaches appeared to be more effective.

The workshop aims  - first at introducing, comparing, and evaluation current joint textbook activities. It will discuss the problems and challenges as well as the success of these activities. Their different contexts and the various experiences of the actors but also the commonalities of joint textbook activities will give the participants new insights in their work.  - Second, all current activities show that the production of a joint textbook is a first and major step for textbook revision but that the second step is even more challenging: The implementation of the textbooks in schools. The workshop, therefore, will discuss the ways in which such implementation on the various national levels have or have not yet occurred.  - Third, in Europe and East Asia the question of regional identity has recently been widely discussed by political stakeholders but also by many civil society actors. In this context the idea of a common European/East Asia history textbook has brought forward. Such a project has stirred some controversies in Europe since opponents believe that it would produce a single master narrative that would not consider the multiplicity and variety of European narratives. However, there is the question whether there is a core of cultural tradition, norms, and historical events that shape a regional identity in Europe and East Asia (or other parts of the world, such as Central Asia or Latin America). The workshop will take up this issue and ask whether regional common history textbooks will promote regional identity. - Fourth, the workshop might contribute to develop suggestions for future joint textbook initiatives. For that reason a representative for UNESCO will be invited since this organization which has been engaged in textbook issue since its foundation in 1946 has formulated “A Comprehensive Strategy for Textbooks and Learning Materials” (2005) which defines concrete methods and aims for new projects. Furthermore, there is still a need for an international handbook on the theoretical, methodological, educational, and normative assumptions of international textbook revision, which would provide guidance to activists.